Words and photos by Chris and Freya at The Sandy Feet

Few images of the Faroe Islands conjure up a sense of wonder more than the impossibly beautiful waterfall of Múlafossur cascading into a tranquil sea or Sørvágsvatn hovering precariously above the windswept ocean.

It is undoubtedly these iconic spots that thrust this mysterious archipelago into the spotlight, but in a land of majestic cliff lines and impenetrable peaks carved by time, and tiny villages tucked up neatly beside the sea, these are not the only sights that define this startlingly beautiful group of islands.

In this remote and windswept corner of the world, whether painted in white or vivid green, unfathomable beauty is waiting around every corner. And so, we set off to uncover a different side to the Faroe Islands, to discover the places that are yet to make it to the likes of social media, that await hidden in plain sight and that are just as deserving of recognition as the islands’ most visited destinations.

On our first day back in the Faroe Islands, it seemed only fitting that we would set foot somewhere that had eluded us completely on our first visit.

Sandoy, an easy day trip from Tórshavn, doesn’t see nearly as many visitors as its neighbours, but on this sleepy Easter Friday, that meant we had the roads all to ourselves.

Weaving out of Skopun we found ourselves in a wilderness awash with gold and peppered with picturesque cabins and glassy lakes that flashed by beyond our windows.

Onward, we whipped past turquoise seas lapping at charcoal shores, along cliff-hugging drives where fulmars whirled effortlessly overhead and between hailstorms and sunshine towards the charming seaside village of Húsavík on Sandoy’s southeast corner.

At first glance, this pretty jumble of coloured houses that sits wrapped around pebbled shores is certainly worth a visit in its own right, but it was the curious cluster of stone cabins on the foreshore that caught our attention. Windswept and unkempt, their grassy roofs camouflaged perfectly into the landscape. Legend has it that these, along with other stone structures around town, are the remnants of the farm of the Lady of Húsavík, a fearsome woman of great fortune who once owned all the land in the village.

AMIDST THE NAKED FOREST OF KUNOY

Picturesque waterside villages are in no short supply in the Faroe Islands, but Kunoy certainly seems to have something special about it.

Reached through an eerie mountain corridor, the village of Kunoy sits perched beside the sea gazing toward the deeply furrowed face of Kalsoy.

Weaving through the delightfully pretty streets of whitewashed houses and colourful roofs, we quickly found ourselves in the countryside beyond; a patchwork of golden fields and lichen-covered stone walls.

We had come in search of Viðarlundin í Kunoy, the Forest of Kunoy, a rare sight in such a barren landscape. Though this tidy pocket of trees transform into a lush tangle of green in the warmer months, in late March with the frigid talons of winter still hanging in the air, many of the trees lay bare.

Unfazed we hopped across the river and continued into the saffron-coloured grasslands, breathing in a welcome breath of crisp mountain air. This remarkable scenery that lies completely hidden from the road was reward enough.

FINDING THE HIDDEN BEACH BEYOND FJALLAVATN

Some vague directions and a hidden beach on the map was all we had to go on when we set of to explore the wilds of Fjallavatn. Though we’ve found a number of incredible mountain drives in the Faroes, we are constantly reminded that the best spots are most often found on foot.

Rewarded once again with sunshine, we had set off eagerly into the tussocky wilderness of Vágar, clambering through the rich honey-coloured fields and hopping across icy rivers on our way toward the lake.

Set in a wide golden basin between snow-dusted peaks, the glistening remnants of last night’s wintery spell, the inky expanse of Fjallavatn rippled out before us. The few cabins that dotted its charcoal shores had certainly embraced this remote wilderness existence.

Following the rubbly shoreline, the clouds began to descend and once again the unrelenting winds whipped across our faces with frigid ferocity. In the distance, the spectacular cliff line began to reveal itself and we knew that turning back was not an option.

Delicate threads of meltwater wove two and fro through the golden landscape on their journey to reach the sea, and as we trudged ahead, the tussocks squelched beneath our feet, wrapping our boots in pearls of frost as the temperatures continued to plummet.

With a final leap across the river and a brief upward climb, we stood on the cliff’s edge, the jet-black shores of the hidden beach peeking out below. For a moment we could just make out a tiny congregation of houses in the distance, the abandoned village of Víkar, before being consumed by cloud that raced toward us.

As the storm swept in, sleet hammered our faces like needles and we were forced to return. But beneath our thick layers of scarves and winter jackets, we couldn’t wipe the smiles off our faces, convinced we had just stumbled upon one of the most beautiful places on the islands, and we got to enjoy it all to ourselves!

SETTING FOOT IN THE SOUTHERN ISLE OF SUÐUROY

For us, Suðuroy held a sense of mystery somehow greater than the other isles which we had come to know intimately over our past two visits as well as through the countless images splashed across out newsfeeds. But as one of the least visited of islands of the Faroes, it felt as if we were seeing Suðuroy for the very first time; each bend in the road a welcome surprise, each viewpoint a unique photo opportunity.

As we hovered beside the Akraberg Lighthouse gazing across the untamed Atlantic Ocean, a local man wandered up to us with a knowing smile. ‘You know, this is the most beautiful of all the islands,’ he said as he threw a bucket of feed out for the sheep.

Having spent the better part of the previous day being battered by hail and squinting at quaint seaside villages through fog, we were somewhat sceptical. But as we stood on our final morning in the archipelago overlooking the colourful gingerbread village of Sumba, the southern-most point of the Faroes, the first rays of sunlight sparkled against the fresh blanket of snow and the narrow road wove delicately into the mountain, we realised, he may have had a point.

We set off through fresh snow and this brief moment of sunshine in search of Ásmundarstakkur, a wave-battered sea stack that hovers on Suðuroy’s magnificent northwest coast, constantly scanning for the next cairn that would guide us along the way.

As the day moved on, we wove between the colourful seaside villages of the north and along the scenic coastal drives of the south. But as it would turn out, this intriguing island had saved the very best for last.

In the dazzling sunlight the melting snow revealed a black thread of road that snaked toward the island’s highest point, and it was here, on the near vertical banks of Beinisvørð that we would find a sight that would captivate us completely, force us to put down our cameras and take a moment for the scene to fully set in.

To the east, diminutive Lítla Dímun stood shrouded in its mystical halo of cloud, like a pyramid lost at sea, its chiselled façade the careful work of millennia in this harsh and unforgiving landscape. Ahead the twists and folds of Suðuroy stretched out before us, painted in broad strokes of white and deep grey amidst the ferocious sea.

The violent weather had perhaps prevented us from seeing as much of the island as we had hoped, but sitting perched on its highest point, every peak and groove sprawled beneath our feet, it’s a place we’ll be sure never to overlook again.

Images from all four locations can be seen in the slider at the top of the page.

THE FOOD OF THE FAROE ISLANDS

Related articles to Uncovering a different side to the Faroe Islands 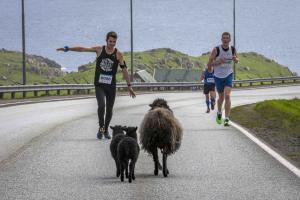 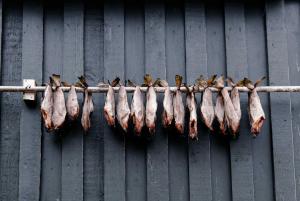 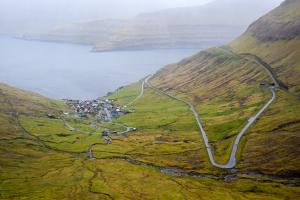 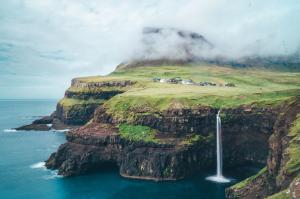 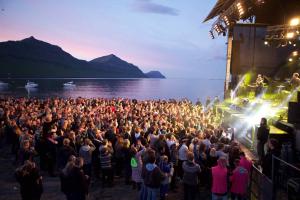 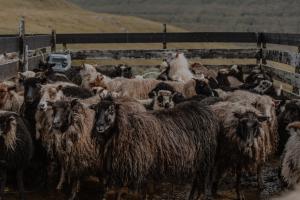 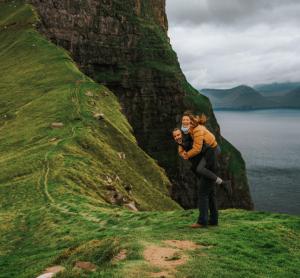