Myths and legends have fed the imagination of Faroe Islanders for centuries. Stories of giants and witches, kings and battles, hidden people and magical creatures are found on all 18 islands.

These myths and legends may hold truths that can unlock the secrets of our ancient origins.

This is the story of the Nix, called Nykurin in Faroese, a sea creature that lures people close before dragging them into a lake.

The Nix is a very dangerous and strange creature.

It lives in almost all lakes in the Faroe Islands, and its favourite occupation is to lure people close and then drag them with him to a watery end.

The Nix has the magical ability to transform himself into many different shapes. When he spots people, preferably children, approaching the lake, he comes out of the water and tries to attract their attention. But the moment someone touches him, they get stuck, and the Nix drags them with him into the lake.

Now, if you should find yourself stuck to a Nix, there is one trick you should know: quickly shout his name out loud and the Nix will lose his power, and you will be free.

Often, the Nix takes the shape of an exceptionally beautiful horse, an animal that is so handsome that most people can’t resist getting closer to and wanting to climb up on his back.

On the island of Vágar lies the biggest lake in the Faroe Islands, called Leitisvatn. This lake once was the home to a frightfully annoying Nix who was extremely eager to capture people who were passing by.

One clear, sunny day, some village children went to play at the lakeside. The waters of the lake sparkled in the sunshine, and the mountains all around shone green. The children spotted a beautiful horse, peacefully drinking water by the mouth of the river that runs into the lake.

The children, fascinated by the beauty of the horse, ran towards it and helped each other to climb up onto its back. The Nix was cunning, and he stood still until the children were on his back. But then he took off, running like the wind towards the deep part of the lake.

Luckily, among the children that day, there were two brothers: Niclas, the eldest, was first up on the horse’s back, but his younger brother, Hanus, only two or three years old, was not as fast as the others and left behind. Watching the horse disappearing with his brother and the others on its back, in despair, Hanus called for his brother to come back for him. But being little, he could not say his older brother’s name properly: “Brother Nics!” he shouted, “Brother Nics, wait for me!”. And instantly, the Nix lost his power, and the children were free to throw themselves off his back just before he jumped far out into the lake and disappeared beneath the dark water.

Well, this Nix was a nuisance to the inhabitants of Vágar and help was badly needed to get rid of the Nix so people could travel safely along the lake side.

In those days, some priests had the power to drive away ghosts and other bad spirits. One especially skilful priest, living on Vágoy, was asked to rid the village of the Nix. So, one day when the priest was walking by the lake, he saw a strange creature sitting by the path, combing its hair with a gold comb. The priest picked up a stone, threw it down towards the lake, and cast a spell on it. Miraculously, the stone started to grow until it became a large rock, and the priest uttered: “Enter the rock, beast, and be gone from this place”! And so, he sealed the Nix inside the rock and after that, it was never seen again.

If you go down to the lake side today, you may be able to find the rock, which we call “Leiðisteinur” – meaning “the leading rock”.

This version of the well-known story of The Nix, Nykurin, was written and read by Ria Tórgarð. Sound production by Finnur Hansen.

Related articles to The Nix 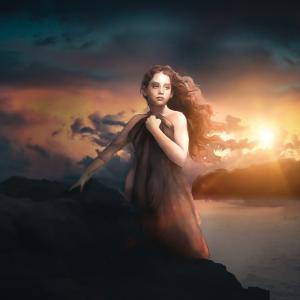