Diving in the Faroe Islands will unveil some of the most spectacular seabed views you’ll find anywhere in the world. Here is information about the seabed fauna and flora found in the waters of the Faroe Islands.

The ocean around the Faroe Islands has a very rich fauna thanks to the constant water temperature and varied seabed. Sea cucumbers, Cucumaria frondosa, can grow up to 30 cm long, making them some of the most visible animals on the hard seabed. They crawl around on their numerous tube feet and look very impressive with their long tentacles.

While diving in the Faroe Islands, you are likely to encounter two kinds of sea urchins – the edible sea urchin (Echinus esculentus) and the slightly smaller northern sea urchin (Strongylocentrotus droebachiensis). You will find them grazing on rocks and seaweed, where they feed on the algae deposit.

There are also many types of starfish. The most eye-catching is the purple sun star – Solaster endeca – which has a diameter of 30-40 cm and crawls slowly across the seabed. The common starfish, Asterias rubens, is present in many places.

Brittle stars, which are close relatives of the starfish, can also be seen in numerous places. In some places, the seabed is almost covered in brittle stars.

One of the most common species of mussels in the Faroes is the horse mussel (Modiolus modiolus), which is similar to the blue mussel but much larger. They can grow up to 20 cm in length. In some places you may see a concentration of “dead man’s fingers”, Alcyonium digitatum, a member of the soft corals family. As the name suggests, it resembles a human hand. It forms a dense colony with finger-like lobes, either white or orange in colour. The white colour appears when the coral is feeding and its polyps are expanded. The dense kelp forests are home to many species of molluscs, such as the colourful Nudibranchia. At the bottom of the kelp forests you will also find a variety of crustaceans, particularly hermit crabs, which in the Faroe Islands are dominated by the species Pagurus bernhardus, or the common hermit crab.

On the hard seabed, in crevices and caves, you can find beautiful red shrimp. There are many species, and one of the most common is the striped shrimp Passiphae tarda. The striped shrimp is closely related to the North Atlantic prawn, which is the one normally used in cooking. When you buy fresh prawns, you occasionally find a striped shrimp, which has got mixed up with the catch. Lebbeus polaris is another very beautiful shrimp: sharp red with a number of blue spots along the body. They are often found in places with a big concentration of red algae.

If you want to see shrimp in great numbers, we recommend a night dive. Shrimp are more active at night, and leave their habitat in order to feed.

The most common species of seaweed found in the dense sub-sea kelp forests in the Faroe Islands can be divided into three categories: green, brown and red algae.

Green algae grow on land, in rivers and waterways, in lakes and in the ocean. Freshwater species are often small while ocean species tend to be large.

Brown algae are multi-celled, and 99% grow only in the sea, particularly in tidal zones and in the upper strata of permanently submerged areas. Some species grow quite big and the largest can form sub-sea forests. These forest species belong to the Laminariales order and the species that dominates underwater forests in Faroes is called Laminaria hyperborea. All kelp forests thrive in saline lagoons, which are common in the Faroes.

Red algae grow in tidal zones and as deep down as light can reach. In the Faroes, red algae have been found as deep as 40 metres. However, in the fjords, the light does not penetrate very deep. Most red algae, around 98%, grow in the ocean, and many require highly saline waters.

Laminaria hyperborea is one of the biggest and lushest of Faroese kelp species. It has a strong, branched holdfast, which anchors it to the rock. The older and bigger the plant, the bigger and stronger the holdfast, which prevents the plant from being torn away from the rock during storms, when the waves are high. The stem, or stipe as it is known, is stiff and coarse; in older plants it has a treelike characteristic. Many smaller algae grow on the frond, e.g. the red seaweed species, Plocamium cartilagineum and Ptilota gunneri. Laminaria hyperborea has a chestnut-like colour and a fully-grown plant is 1-3 metres long. Laminaria hyperborea grows in the upper strata of permanently submerged zones.

In the Faroes, there are small Laminaria hyperborea plants at 25-30 metres depth, but the densest forests are found at depths of 15-20 metres. The plants are hardy and can withstand strong surf. Knotted wrack, Ascophyllum nodosum, has numerous flat fronds but no stipe. The fronds have large egg-shaped air bladders that are wider than the fronds. Every winter, new air bladders are formed at the end of each frond. This makes it possible to determine the age and annual growth of the species. The colour is yellowish or greenish brown, and the size about 0.5 – 1.5 metres.

Spiral wrack, Fucus spiralis, is similar to knotted wrack but has no bladders. The fronds are often twisted. The colour is a dark, yellowish brown and the length 15-70 cm. It is commonly found close to the shore as it can withstand stronger surf than knotted wrack. Ptilota gunneri is a fern-like alga with feathery fronds. Its colour is dark red, its length 5-30 cm. This seaweed grows in deep waters, often on kelp. 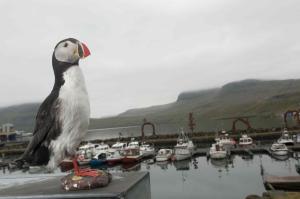 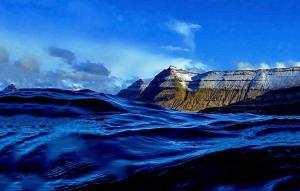 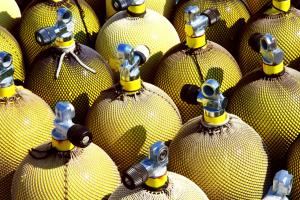