This awestriking and diverse route which includes a walk along the coast to the ruined Skarð, a village that faced a heavy fate, and a hike through the largest Faroese gorge, Skarðsgjógv, to Kunoy.

The route starts by the boat basin north of the village Haraldssund. Finding the path will be tricky, but it becomes more visible once you are a little further along the beach. Many brooks and streams are along the way heading north, and please be cautious where the bedrock is slippery.

In the past, there was much communication between Haraldssund and Skarð, and the path between these two villages connected them for centuries.

It is uncertain how old the village of Haraldssund is; however, it is believed that both Haraldssund, Kunoy and Skarð are exceedingly old villages. Haraldssund is a calm place, and in the olden days, all the villages in Kunoy had boathouses in Fiskimøl, which is just south of where the tunnel entrance is today.

The route to Skarð is fascinating because it runs close to the beach, and you can hear the waves hit the cliffs and see the cliffs and mountains stand above you. Kunoy is the highest island in the Faroe Islands and has no less than six of the ten mountains that stand above 800-meters in the Faroe Islands. Many areas are not walkable, and we advise you not to wander into the mountains of Kunoy without an experienced guide.

Once you have walked about 1.5km, you arrive at Skarðsmannastíggj, where the men in Skarð would travel up after fishing with the men from Haraldssund men. First, they would head up Skarði and row with the Haraldssund men south to the rockface, and then from there, they would walk back north to Skarð.

The men in Skarð had a boathouse in Búðadal, and these ruins can be seen just north of Búðadal lake, which was the old indicator between the two villages. On days when the sea was too rough in Skarð, the men used the boathouse in Búðadal or rowed to Haraldssund.

After about 5km, you can see Skarð and the house ruins, which seem extremely small down by the beach. Whilst we walk towards Skarðdal, at 500-meters, the high rock edges under Kúvingarfjall and Middagsfjall start to appear. Once we reach Skarð, we can see right up on the mighty Skarði with the largest gorge in the Faroe Islands, the gravelly Skarðsgjógv.

Follow the path north of the village past the unique waterfall in Skarðdalsá; on the other side of the pool is Skálatoftir, which is also a ruined village. Then walk past the stone fence at the top until you suddenly arrive at the house ruins.

From the village, there is a decent path heading down to Kleivina, where you can see how difficult it would have been for Skarð people to float boats in the area.

On the 23rd of December in 1913, seven Skarð men and a boat were sunk and lost at sea due to sudden bad weather. The village lost all of their best working men in one day. Life became hard, and the village was deserted in 1919. There is a memorial set up in Skarð to remember the men lost at sea.

We recommend giving yourself time to enjoy the stillness and view in Skarð before you continue towards Kunoy.

The path from Skarð to Kunoy runs through Matará, which runs through the middle of the village. Matará starts with a spring-up in Hábrekka about 300-meters above the field garden. To get water to the village, they dug an open water path to the village. Although this was done with simple equipment, it worked well, which is why a river still runs straight to the village.

You continue up towards Túvustein and then up Skarðsgjógv. It is hard to walk up through the gravel path, come close to the gorge mouth, and continue through the gorge. However, this route was used by the Skarð people often because they did not have a church in Skarð. To attend church, they would head to Kunoy; this would be done every three Sundays when the priest visited.

Please be careful and give yourself time to walk to avoid causing gravel and rocks to fall. If you are several in the group, we recommend walking together but not so close to create a gravel slide. It is recommended to be no more than four in each group. Once you are down in the gorge, it is essential to walk down close to the southern side. This means that when you walk upward, you must closely keep to the wall on the left side. This is to avoid the gravel that may fall over you. It is strongly discouraged to walk through the gorge during the winter and spring as this is when there is the most significant amount of rockfalls.

There are many fulmars bird nests in the crooks and holes of the gorge, even down where you walk. Be aware of this so that the fulmar does not scare you—be careful as they can vomit on you.

It is not common to see a gorge within a gorge; however, you will witness this as you walk up.

Walking the 300 meters up through the gorge is heavy and tiring. This trek feels pretty long, but once you reach 618-meters, you can expect a beautiful view. You will see the area west of these three high Kunoy mountains: Urðafjall, Middagsfjall and Kúvingafjall. Below you can see the beautiful Lítlafjall, which separates the two valleys above the village of Kunoy. At this point, it is lovely to sit down and enjoy the moment.

You will walk from the gorge mouth down gravelly terrain and continue along the north side of Skarðdal, down through Klovastígar. It would be best if you walked on the right path, visible in the steep terrain further down. The trail runs down through the steep mountainside of Klovastígar. Two particular places are wet and muddy on the path, but on a good summer's day, this won’t matter. Due to no cairns directing the correct route through Klovastígar, it is important to follow GPS directions. Please use a good quality GPS.

It is beautiful to walk down through the crag in the valley, and there is much to see. Just observe how different the valleys are.  You will walk down towards the church in Kunoy, and then you will walk down through Botnbrekka. Once at Skarðsdalsá, there is a fence you must climb to make your way across the stream. Once you near the stone fence, you start to notice the path. Make your way through the stone fence and straight across the upper road (Niðan Viðarlund) down the track heading to the church, where the other cars are parked. In the summer, there can be a lot of grass on the road, so it may be difficult to see where to walk. If this is the case, please use the GPS.

Parking in Haraldssund:
Decent parking on the north side of the quarry in Haraldssund; park your car down there, facing the sea. To avoid blocking access to exits and work equipment lying on the quarry's upper side—refer to the green line. Then walk north along the road through the stone fence at 75-meters—note the blue line.

Not suitable for children.

Expert - The 300m up through Skarðsgjógv, are steep, and there is much loose gravel. You must take care to avoid causing gravel to roll. Because of the risk of landslide, you must walk close under the side furthest south of the gorge—close enough that you can always touch the side.

For the most part, it is decent and grassy terrain. Certain areas are wet, and it can be challenging near the brooks between Haraldssund and Skarð, as well as down on the flat sites in the valley on either side of Skarðsgjógv. Up through Skarðsgjógv, it is steep, and there is much loose gravel, and it is here you must take the most care to avoid causing gravel to roll. Because of the risk of landslide, you must walk close under the side furthest south of the gorge—close enough that you can always touch the side.
Weather today 3 day forcast 7 day forcast 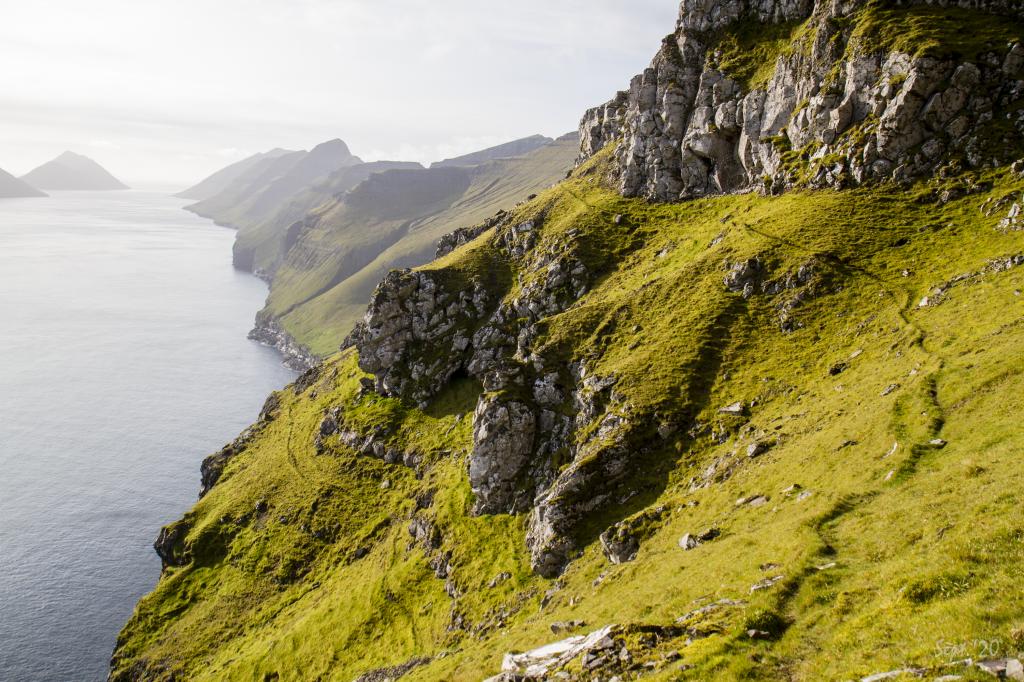