The route begins at Fitjarnar, west of Nes. Follow the fence between the infield and outfield up onto the ledge, Lítli Hamar. On the ledge is an overgrown stone path. The path is called Prestgøta (Priest’s Path), presumably because it is so broad that there was no need for the priest to dismount his horse.

The path continues up along the gorge, Káragjógv, where, according to legend, the priest Kári fell whilst travelling on horseback. In some places it is rather steep, and there are loose stones, so be careful.

Hvalba and Sandvík are among the oldest villages in the Faroe Islands. Hvalba is, among other things, known for its coalmines.

Back in the day, Hvalba was attacked by pirates multiple times. Tales are of a major attack in 1629 when pirates plundered and murdered several people. One of the pirate ships ran aground during a storm, and about 300 pirates were lost at sea. The ground where they were buried is called Turkagravirnar (The Turks' Graves) and is located next to the beach, just before Nes.

For centuries, the path along Káragjógv, Hvalbiarfjall and Mannagjógv in Trongisvágur was one of the main traffic routes and connected Suðuroy to the areas north of the fjord. People who arrived by boat to Suðuroy moored in Sandvík or Hvalba and then travelled onwards by foot.

A different route would take you to Botnur and over Nakkur. It was shorter and faster, but harder for people with walking difficulties and those unfamiliar with the route.

The traffic across Káragjógv substantially decreased when the tunnel of Hvalba opened in 1963 as the first tunnel in the Faroe Islands. In May 2021, a new tunnel to Hvalba opened to traffic.

When you get to the top, you will see Hvalbiarfjall right in front of you. Follow the cairns. The first hill you come to is called Lítli Íslendingur. To the west are Sigmundarsteinar – the stones that Sigmundur Brestisson is said to have carried up here. Legend says that if you walk between the stones, you won’t live out the year.

Sigmundur was a Viking chieftain living in the Faroes around the year 1000 and a key figure in the Faroese saga. He lived in Skúvoy and converted the Faroese to Christianity, with a sword in his hand. According to legend, Sigmundur swam all the way from Skúvoy to Sandvík – most of the distance with two men on his back.

All sorts of things have been carried and dragged over this mountain. It is said that the first pipe organ of Hvalba was carried across the mountain in the early 1890s. The organ weighed about 200 pounds.

From Lítli Íslendingur and up toward Íslendingur, the ground is flat and even. The view from here is excellent. You can see both Lítla Dímun, Stóra Dímun, Skúvoy, Sandoy and a part of Hvalba. The name Íslendingur (Icelander) most likely derives from the cairn that stands tall against the northerly winds and quickly gets covered in ice in frosty weather.

One of the cairns south of Íslendingur has a special story. On 1 December 1917, a man from Hvalba was on his way from Tvøroyri to Hvalba. When a snowstorm hit, he stopped by this cairn. To stay warm, he began disassembling and reassembling it. The man was found alive next to the cairn.

From Íslendingur there is a flat gravel path all the way to Mannagjógv. On this route, you can see the beautiful valley Vatnsdal and the lake Vatnsdalsvatn. The lake has two islets that are home to many birds.

Typically, this hike is estimated to take two hours, but many examples are of much quicker trips across Hvalbiarfjall. Shortly after 1900, a Hvalba man covered the distance in 45 minutes when he ran from Hvalba to the old Doctor's house in Tvøroyri to fetch medicine for a sick child. During World War II, people would race on the path – the fastest runner back then completed it in 45 minutes and 35 seconds.

From Mannagjógv, there is a remarkable view of the entire fjord of Trongisvágsfjørður. Trongisvágur is an old agricultural village, also known for coal mining. In the 18th century, Tvøroyri developed as a market town and the two villages slowly merged.

At the gorge Mannagjógv, the path splits in two – you can go both ways. The path on the right takes you to the plantation in Trongisvágur, where you will find benches and tables and a great place to relax with a cup of coffee after the journey.

Parking is available by the harbour, located some 7 minutes from the starting point.

Plenty of parking is at the sports area, a 5 minutes walk away from the starting point.

Suitable for children above 10 years old

Difficult - Steep and demanding to walk up along Káragjógv, but apart from this, the ground is flat and easy to walk. Tread carefully along Káragjógv, especially in freezing or wet conditions.

Grass path most of the route, but some stones and rocks at Káragjógv.
Weather today 3 day forcast 7 day forcast 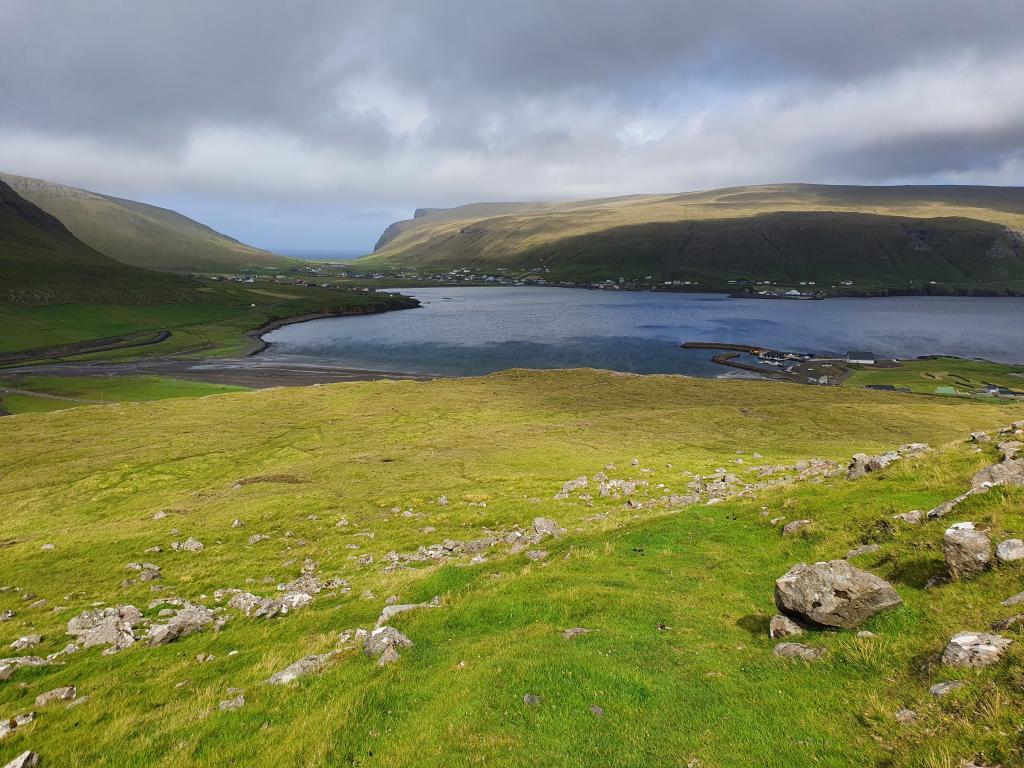