Embark on an adventure in landscape filled with dramatic history. You can almost feel the witch’s breath on your neck.

The route starts at the old school in Sandur. Follow the road Undir Reynum. Continue along the road that says Søltuvíkarvegur.

On the right-hand side of the road, after about 700 metres, you will have your first encounter with the witch. Here, the Gívrinarspor (Witch’s Footprint) is visible in stone.

According to legend, there lived a witch in a hole west of Gróthúsvatn. One day, a man passed the hole Gívrinarhol – which we will pass later, and saw the witch grinding gold on a grinder. On the floor, a child was playing with a golden stick. The man grabed the golden stick from the child and fled from the spot on horseback. The witch called on a neighbouring witch, who ran after the man. She jumped across Gróthúsvatn, and you can still see the imprint of her foot in the stone. There are also imprints of her knuckles in this area.

At Gróthúsvatn, there is a four-metre tall stone that the women of Sandur have decorated with a knitted cover, which is based on the legend of the witch. The stone has a circumference of 18 metres.

Enjoy the view over the peaceful Gróthúsvatn. The serene nature of the lake is in stark contrast to the winter waves, which can be quite rough in this area. The sea does not even rest during the summer. Hear the waves relentlessly thunder against the rocks and feel the fresh scent of salt water.

Sandur is one of the oldest villages in the Faroes. The latest archaeological excavations show that people have lived in the village as early as the years 300-400.

From Gróthúsvatn, the path winds uphill, and after approximately one kilometre you will come to Gívrinarhol, a hole where the witch lived. From Gívrinarhol you can look to the southeast and see the old village of Skarvanes, which was one of the best places in the Faroe Islands to grow grain. You can also see Skúvoy. This was the home of Sigmundur Brestisson, the Faroese chieftain who, according to the Faroese saga, brought Christianity to the Faroe Islands. Skúvoy is also where his grave is located. From here, you also have a good view of Stóra Dímun, Lítla Dímun and Suðuroy.

From Gívrinarhol and about 300 metres on, you must be careful as the terrain on the road’s left-hand side is steep. After a while it evens out again, and the terrain becomes flat all the way south to the mountain Salthøvdi. Here, the people in the village of Sandoy cut a large part of their quality peat.

After about four kilometres, west of the Tyrilsválur hill, we have a good view down over the peat fields, where we very clearly can see the square so-called peat eyes. At this point there is a side road that goes in a south-westerly direction to a lookout post just south of Søltuvík. It is not permitted to drive on this side road. From the lookout you can enjoy the beautiful view over the steep cliffs on the western side of Sanoy, where you can, among other things, can see the 182 m high sea stack Oknadalsdrangur. You can consider taking this road out to the lookout post and from there along the edge down to Sølvuvík, and then back home along the paved road - i.e. you go in a circle clockwise.
Slowly, the bay of Søltuvík reveals itself, surrounded by a collection of rocks that only allow very small boats to come inside when the weather is good.

Depending on the weather it can be harsh and ruthless. In November 1895, a shipwreck took place in the area. A British steamer, Principia, got caught in a storm and drifted into the rocky area. The ship sank and 28 people drowned. Only one person survived the tragedy. He managed to pull himself up on a cargo hatch and drifted at sea for 14 hours until he was rescued in Kirkjubøur. That same hatch is today used as a table top in Roykstovan on the old farm in Kirkjubøur.

When you follow the road down to the beach, you can see two anchors from Principia that divers retrieved from the ocean floor in 2001. At the site, there is also a memorial stone in memory of the dead.

Plenty of parking at the school in Sandur - see green lines. From here walk along the road Undir Reynum (blue arrow) and you'll find a sign pointing towards Søltuvík

Easy - An easy hike along a paved road 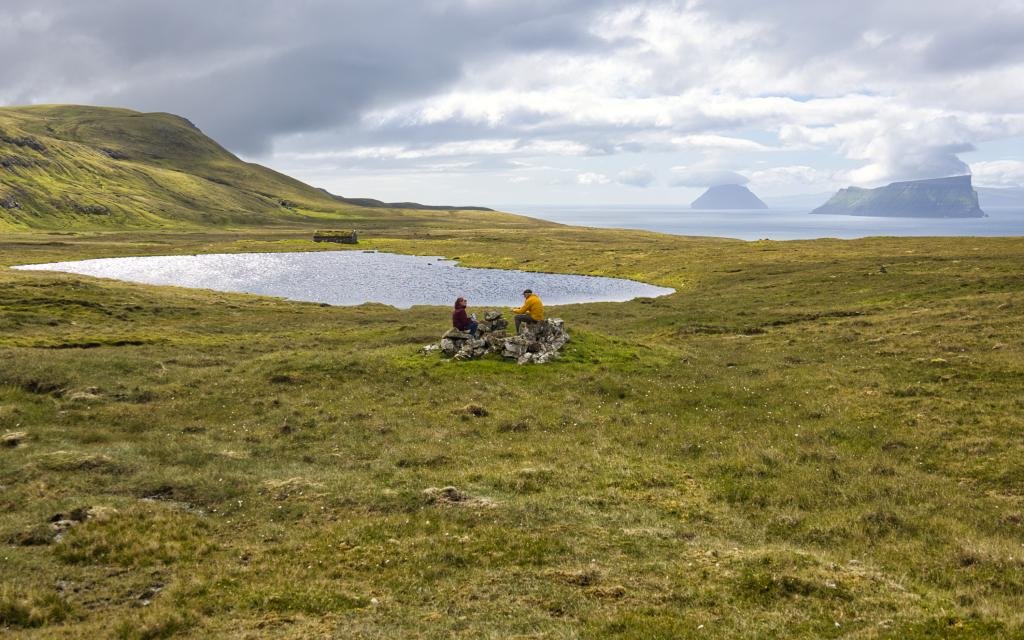