Fall in love with the southernmost island in the Faroe Islands on this challenging, special, and beautiful route from north to south

The route starts at the end of the road by Mýrarnar in the valley west of the village of Sandvík. There is a sign explaining that this is the old village path to Hvalba. Follow the cairns uphill.

Sandvik is one of the oldest villages in the Faroes. According to legend, the chieftain Sigmundur Brestisson swam from Skúvoy to Sandvík in the early 1000s after the rivalling chieftain Tróndur í Gøtu and his men had attacked him. Sigmundur swam most of the distance with two men on his back. Exhausted, Sigmundur came ashore on the beach in Sandvík, but was murdered by the farmer Tórgrímur Illi and his sons.

At the top, the terrain is flat well before it starts to go downhill again towards Hvalba. On the last stretch down to the village, continue in a wedge with a stone wall on the right and a fence on the left. Go through the village, past the sandy beach and then left towards Nes.

On the road to Nes, you can look up to an area in the valley where coalmining has taken place for many years. Suðuroy, and especially this part of the island, is the only place in the Faroe Islands where coal can be mined.

A few hundred metres before you reach Nes, you have Turkagravirnar (The Turkish Graves) on your left-hand side. Hvalba was, like the rest of Suðuroy, much plagued by pirates in the past. There are records of a major pirate attack in Hvalba in 1629 when Algerian pirates kidnapped many of the villagers. According to the stories, one of the ships ran aground and the bodies of the pirates washed ashore. They are said to be buried in this area.

The route begins at Fitjarnar just west of Nes. First, follow the fence between the cultivated land and outfield up onto Lítli Hamar. Up on the ledge, a stone path, which is now overgrown, begins. It is called Prestgøta (Priest’s Path), presumably because it is so broad that it was not necessary for the priest to dismount from his horse. The path continues up in Káragjógv, into which the priest Kári is said to have fallen. Up through the gorge, the path is steep in some places, but it is not difficult to walk. However, be careful if wet when the stones can be slippery.

If you follow the cairns, the first hill you come to is Lítli Íslendingur, and just to the west are the stones Sigmundarsteinar, called Sigmund, Tórir and Einar. Do not walk between them. Either you age rapidly on the spot, or you won’t live out the year. So, legend says. It is said that Sigmundur Brestisson carried the stones up here.

Halfway between Hvalba and the gorge Mannagjógv, you have a unique view of Vatnsdal and Vatnsdalvatn, two islets that are home to many birds.

When you get to Mannagjógv, the cairn path splits into two. You must take the path to the right. Go down to the grove, down the valley in Trongisvágur. In the grove, there are tables and benches and the place is ideally suited for a coffee or lunch break, before you continue on your journey.

Go down to the end of the grove, over the bridge and up the road. After about 40 metres, you come to the sign that says Gl. Fámjinsgøtan. Follow the path and cairns uphill towards Hvammabotnur and further up to Oyrnaskarð. In Hvammabotnur, the landscape is quite fascinating with many rocks. To the west is Gluggarnir, which is the highest mountain on Suðuroy. Above you is Oyrnafjall. There is a tradition to mount Oyrnafjall on New Year’s Eve and light a fire.

From Oyrnaskarð you see the village Ørðavík. Go down towards the village and cross the stream. Head for the first turn before the road turns uphill. Then continue approximately 1.3 km along the road, down towards the houses in the village. Right by the first building there is a road to the right. Follow the road for about 200 metres up to the gate to the outfield. From here, you can see up to Mannaskarð, from which the route continues.

The path follows Tinggil Uppi Millum Stovur, which was the site for the ancient Thing (local assembly) in Suðuroy. The landscape is distinctive, with gorges in the terrain with hills with sharp ridges on the sides. Here, you also see Tingborðið where, according to legend, a farmhand from Hvalba called Snæbjørn was sentenced to four-years hard labour on Bremerholm for having bought scarves from an illegal trading ship. Not surprisingly, Snæbjørn was dissatisfied with the judgment and tried to kill the judge, but instead he struck the sheriff so hard that he died. He escaped from the Thing and lived for many years as an outlaw in the mountains in Suðuroy. Walking up to Mannaskarð is tough. There are many stones on the last stretch. Be careful not to dislodge stones.

Up on Mannaskarð you have a good view of Dalurin with Vatnsnes and Bessavatn. At Vatnsnes in the 1960s, SEV, the national electricity company, built a dam for hydropower and drilled a tunnel that goes from Vatnsnes down to Botnur. Then comes Vágsskarð, which this path also passes, and Hvannafelli. On the right you see Borgarknappur, whose top resembles a medieval castle.

The path follows Vatnaryggur between the lakes. There are many birds to see here. It’s also said that there are particularly many Huldufólk (Hidden People) here. To the left of the path on Vatnaryggur is Ærgidalur. Here, archaeologists from the National Museum excavated ruins of a house. The valley was used as a mountain pasture in the Viking Age. Back then it was common for people to live in the outfield during the summer to tend to the livestock. After Vágsskarð, the path slopes downhill gradually until it reaches Hvannadalur. From there, the descent is rather steep. The cairns lead the way down to Hvannadalsá. As you approach the grove, cross the river and go down to Vágur on the west side of the plantation.

Head for the bay in Vágur and walk along the paved road to Lopra. The old village path used to be here in the area. Beware of cars because there is no pavement here. From here, you can see the famous Beinisvørð and the pyramid-shaped mountain Kirvi. A few metres before the tunnel to Sumba, turn right up through the outfield. The path is quite difficult to see here but aim for the electricity pylons and the small stone bridge on the first part of the way. Use the big mast on Hesturin as a landmark.

On Hesturin you can choose to walk along the paved road all the way to Akraberg. This is recommended if there is fog in the area. But otherwise you can follow the old path down to Sumba and from there move on to Akraberg. You will find the path on the right-hand side by the road just after the cattle grid. Sumba is considered to be one of the oldest villages in the Faroes. The village is famous for its chain dance and not least for its beauty with the legendary Sumbiarhólmur just outside the village. Sumba has also raised one of the most famous poets in the Faroe Islands, Poul F. Joensen, who was known for his satirical and critical poems about Faroese society. He was, nevertheless, also a master of heartfelt love poems and patriotic poems.

The path leads down to the area by the football pitch. Here, you get to the main road where you turn left at the sign showing Akraberg. The route to Akraberg is about two kilometres on paved road.

Route 700 and 701 take you all the way from Sumba to Sandvík. However, you need to request these busses. Find more contact information here.

The two places where it is best to park are not in the village itself.  The picture below shows these places.

The first place (P1) is just before you reach the village with some distance to the villagepath. On the other hand, the bus passes this point and therefore it is easy to get back to the car.

The second option (P2) is right next to the starting point of the hikingpath. Although this is a larger slot, the area gets a bit muddy when raining.

Suðuroy from south to north

Route 700 and 701 take you all the way from Sumba to Sandvík. However, you need to request these busses. Find more contact information here.

Suðuroy from south to north

Not suitable for children under 10 to 12 years because of the distance. But if you choose to divide the route into stages, you can bring children. Contact the local tourist office for possible lodgings

Mostly grassy cairn path. However, in some places stones and rocks, e.g. at Káragjógv. There is a paved road from Hvalba to Nes and from Vágur to Lopra
Weather today 3 day forcast 7 day forcast 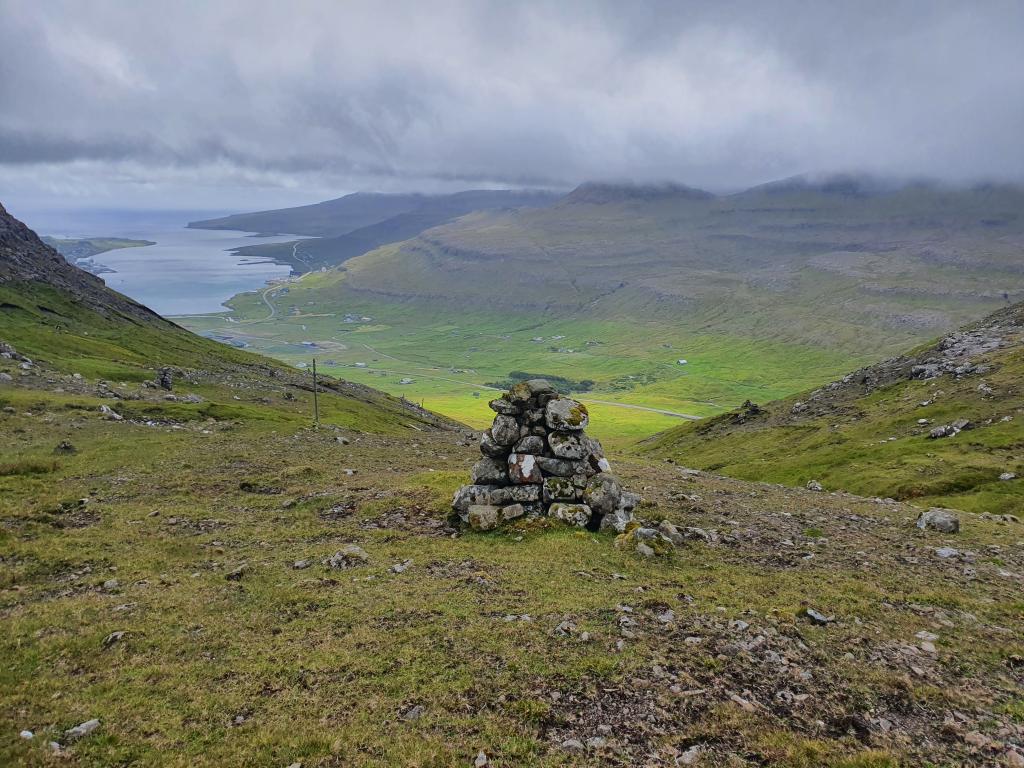