This hike is challenging, exciting and gorgeous. On this hike, you will witness some old village ruins, the bedrock, and surrounding high mountains, all of which make this a memorable experience.

The hike starts in the village of Gásadal. From Gásadal, you will walk along the Slættanes path towards the valley and then up towards the crest between Árnafjall and Eysturtind. Up on the mountain crest by the cairn 150-meters south of Lambagjógv, the trail splits and becomes quite gritty. From there, heading east, you start heading down to the village of Víkar. On the mountain crest at an altitude of 519-meters, you witness a gorgeous view spanning across Vágar, Vestmanna, Saksun cliffs and the mountains further north on the island Streymoy. Looking down at the tremendous plain below, you will see the ruins of the village Víkar.

The village was founded in 1833; however, as it was difficult to reach, life in the village only lasted for 81 years, leaving it isolated in 1914. In 1855, when the population was at its highest, 16 people lived in three houses in Víkar. The villagers owned 6-8 milk cows and later ox; the villagers would also sometimes sell puffins caught in the bird cliffs.

From the mountain crest, the path runs primarily straight downwards in a north-eastern direction. Bit by bit, as we walk downward, we near the gorge. At about 300-meters altitude, we arrive down the grassy terrain where the path starts to run more evenly by the gorge.

Once down, you can see two brooks which run downwards on the southside of the gorge, which meet down on the plain. Walk down between these brooks. Above where the streams meet, walk east of them downwards towards Víkar. Here the path is not visible due to gritty terrain, but once you are down on grassy terrain, you will start to see a path run down along the back between the brooks, about 60-80-meters south of Lambagjógv.

Be careful not to get too close to Lambagjógv as we annually experience rockfalls in the area. Furthermore, there is a significant crack in the terrain between the lowest part of Lambagjógv and the outer brook, which clearly shows that this can collapse at any point. Therefore, for your safety, do not go out towards the external brook.

The route down towards Víkar is decent and walkable on a dry day. However, due to the grittiness at the top of this route and its steepness, it is unsuitable for children and people unaccustomed to hiking on such terrain. If the way becomes too steep and challenging, you have likely gone too far east of Lambagjógv.

Like many other places, this path includes somewhere to place your coffin and rest whilst carrying the deceased between Víkur and Gásadal. This resting place is in the middle of the steep slope at 370-meter altitudes on a prominent rocky knoll called Á Kristu.

Once you have walked down to the plain, walk down to the settlement by Stórá. The houses there are not the original village houses but are instead houses used daily by those with sheep in Víkar and the close area. However, the old foundations and cultivating plains can be seen there and whilst walking around the area; you can imagine what it was like to live there.

It could be beautiful and peaceful during the lovely summer days and lonely and hard during violent wintery days. One might wonder why people even decided to settle there in Víkar. This is especially a challenging place to live, considering the challenging path to the closest neighbour village Gásadal, and the even more challenging path to Býggjar, where the villagers would shop. It is not surprising that the village population decreased. The last house to leave Víkar was taken down, moved and built back up in Gásadal.

On a decent summer day with no heavy surf, we recommend walking down towards Nevtanga, located down by the high vertical cliff on the bank. The scenery is beautiful here. It is possible to walk down this ridge on the west side by Nevið to where two boathouse foundations stand. There were two boats in Víkur whilst people lived there. Below the cliff lies this significantly large and long straight bedrock on Nevtanga. On this bedrock, there are only a few large rocks under the ridge and further under the western end, as the rest of the bedrock has been hoovered for loose material.

Up towards the bedrock, you can see several larger and smaller waters with their colourful green seaweed. This seaweed creates beautiful exhibitions facing the cliffs under Ritunøva, on the other side of the bay, and to the northern end of Streymoy. The Víkur boats were pulled across this long bedrock, and there were few working hands in Víkur, so the job was challenging and heavy.

On your way out of Víkur, you will head back to Gásadal along the same route you came from.

In Gásadal, there is decent parking in the middle of the village, with ample space and a public toilet—refer to the green markings. To reach the start of the route, please follow the blue arrows in the image below. Right outside the area by the stonewall gate, you can see the first cairn of the route through the valley:

Not suitable for children.

Difficult - We only recommend this route during decent weather and in the middle of summer. The route reaches up to 519-meter altitudes. Therefore, there should not be fog or risk of fog whilst arriving at Víkur, which will lead to the chance of not finding your way back over the mountain crest. The uppermost section of the hike, above Víkur, is steep and gravelly, and the path is not visible here. Outside of mid-summer, the trek is quite dangerous as there is not only a chance of frosty and slippy terrain but also the daylight period is too short. Therefore, we strongly recommend not conducting this trip outside the recommended times and recommend hiking with a knowledgeable guide.

Grassy and decent terrain in Gásadal and Víkur; however, certain areas are steep and gravelly. This is especially the case on the side closer to Víkur, where the route’s highest point is quite steep and consists of loose gravel. In Gásadal, the terrain is wet in areas.
Weather today 3 day forcast 7 day forcast 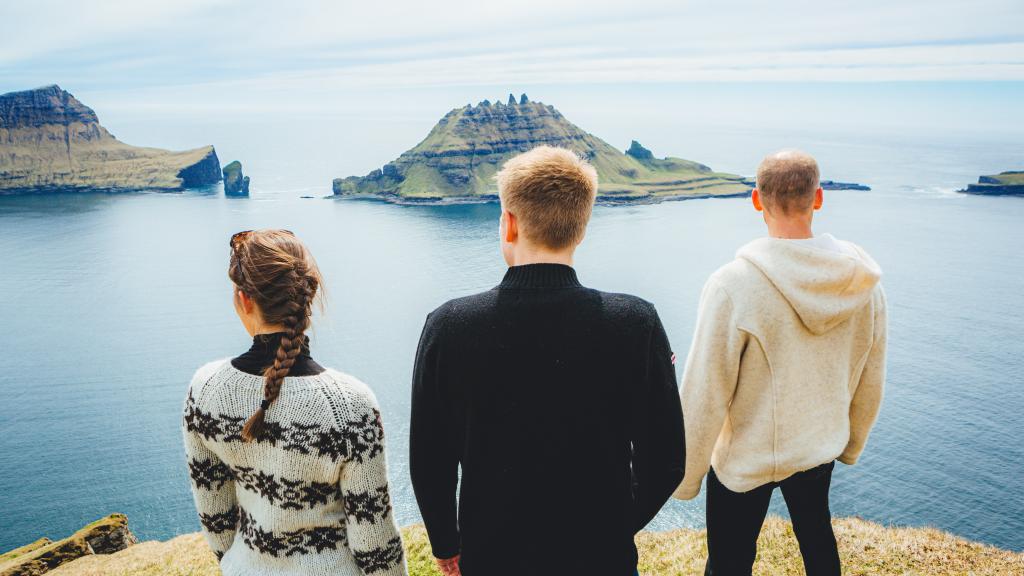